If it wasn’t for the haystack hair, I’d love these pics!

I love to wear sleeveless styles during the summer heat but they don’t satisfy my desire to visually balance my hips and shoulders.  Long ago I realized that balance was a key to my being happy with my silhouette.

So some good news which makes me cautiously optimistic.  The chemo I’m undergoing has tolerable side effects plus it reduced my cancer marker by 150 points, nearly in half.  Yippeeee! But I’m cautiously optimistic because, I’ve had good initial results before. As time when on and more chemo accumulated in my body the sides effects became intolerable and any gains against the cancer were reversed.

An interesting point to me is that this chemo targets breast cancer. My insurance initially denied my claim i.e. they wouldn’t pay the bills.  But we resubmitted and gave them lots of information re the treatment I’ve already received and the interesting fact that while my DNA has the good BRAC, my tumors had the bad BRAC.

Anyway, it is a happy day for me especially since I’m now in the the Once A Month Review stage.  Means they take blood and run a panel of tests each month; every other month I get a Cat Scan too. Best news I’m not making the 3-hour one-way trip to Sioux Falls. Those were rough on me.

This pattern is definitely misnamed.  It should be “The Instant Gratification Jacket”

With this version of the Nova Midi, I made some important progress in fitting and styling for me personally. But I’m not wild about  this version. In fact, I’m far less enthused about it that I was with Version 1.  I’ll tell you why… 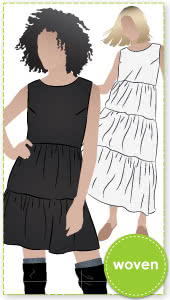 I’m just not sure about this dress. Let me explain…

I am really enjoying having a TNT top.  To read about how I use Loes HInse V-neck Finish, CLICK HERE

Haven’t shared my progress in  a while, so thought I’d take a moment for those of you who are interested, and update my cancer status.

Since Sept 2019, I’ve been through 3 different drug sets to treat the cancer which is now in my lymphatic system.  I have 3 tumors that are about 2 cm and 5 that are little dots.  The goal is no longer to cure, but to keep the existing tumors from growing larger, keep new tumors from forming while  allowing me as normal a life as possible.  The first 2 drug sets kept new tumors from developing but did not stop the existing tumors from growing.  The 3rd set kept new tumors from forming, stabilized one of the tumors but the other 2 increased in size.  While it was having a positive effect on the cancer, it was having a negative effect on my quality of life.  During the last cycle, I slept.  By the end of the last cycle I was so exhausted, I slept for 5 solid days. Time for a change in meds.

Currently I am enrolled in a trial program.  My cancer genomic study came back with BRAC+ although I am BRAC-. This qualified me to use a very different set of  drugs, Afinitor and Niraparib.  These target breast cancer. My cancer is ovarian with Brac-; accordingly we’ve been using drugs that target ovarian cancer.  So for this new treatment I take pills instead of being hooked up with an IV for an infusion.  One pill I take daily. The other is 3 times a week. I’m having to travel to Sioux Falls (3 hours one-way) every Wednesday for the first month.  After that, it will be a once a month trip.

Side effects are minimal.  A little nausea, a little neurophy, a lot of weakness which I suspect was from the previous exhaustion. Coming upstairs still requires an immediate break to regain my breath.

My quality of life is improving.  I am not sleeping 24/7. Not as active as I was pre-cancer diagnosis, but I am sewing almost daily as well as doing a little housework.  I can stand for short periods of time. No more than 20 minutes. But that is enough to get all my morning grooming done. Although morning grooming is somewhat truncated, shower, body lotion, face washing and moisturizing with minimal makeup (foundation and eyeliner).  Since on-my-feet time is so limited, I’ve restricted my clothing choices to wash and wear-from-the-dryer thus limiting the ironing time.

Another much appreciated improvement has been to my cough.  All cancer meds seem to have a side effect of cough.  Mine was particularly bad.  More like whooping cough in children.  Sometimes it would start and I could not stop. Dr finally prescribed a cough syrup with a little [odine which stops the cough immediately.  I use that stuff very sparingly just because it was so hard to get. I tried every over-the-counter cough syrup and I’m pretty sure nearly all the prescription-only syrups before getting this syrup.

Even with the new cough syrup that would control the cough, I continued to have the cough and over-active sinuses. I  developed tightness in the chest, was hacking up some ugly stuff and needed a rest break coming upstairs.  My cancer doctor referred me to a pulmonologist. The pulmonologist asked a lot of questions, reviewed my CT scans; gave me a lung test (breathing in a tube while measuring lung capacity and use) and took an  Xray.  All that to prescribe me a inhaler with a $65 co-pay.  (In case you’re wondering, I normally have a $10 co-pay). But it worked. Took about 3 days for me to notice improvement.  Now, almost a month later, I’m not needing a half-way break to get upstairs.  Hacking only in the morning for about an hour.  Able to fall and stay asleep at night; and I go hours during the day without coughing or blowing my nose.  Wish I could have seen him sooner but TBH neither I nor the cancer doctor thought my symptoms were more than allergies.  Had to develop those other symptoms. I hasten to add again, that neither of us thought it was more than allergies. In fact I would complain that my allergies were “going wild” not that I had a vicious cough.

I am cautiously hopeful because this set of drugs  is giving me a much improved quality of life. I am so hoping it will also control the cancer. Wont know for sure until the CT Scan on the 29th.

I know you are continuing to hold me in your prayers for which I am grateful. I believe in prayer and often turn to it myself. I can only say: